MEDICAL MISSION TO THE WOMEN'S ISLAND 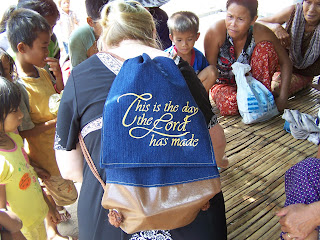 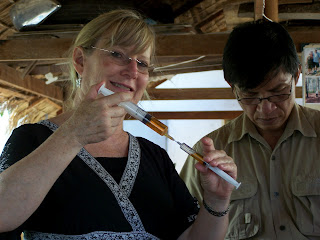 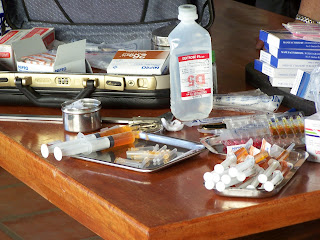 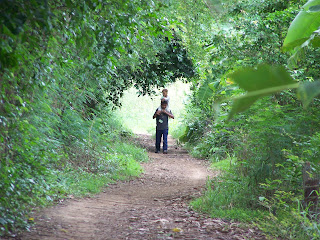 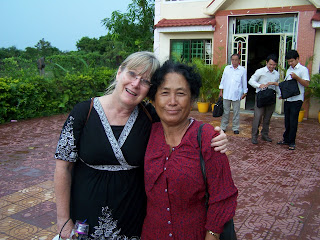 Saturdays the guys get to take a day off from reading through the Bible and devotions at 5:30AM. But they were all up and ready for a day of service this Saturday by the time we left at 6:00. Six of them joined our caravan to the Women's Island..an island in the Mekong River used to house, torture and kill some 1500 prisoners during Pol Pot's reign and then as aa place to isolate women who were left on the streets after the regime's demise. With more men slaughtered than women, many men took on two wives to protect,but so many women and children were left without a place to go. In an attempt to clean up the country and its appearance to the outside world, the street people, both women and children were exiled to this island with no contact with the outside world for thirty years. When Sokhom learned about the residents of the island, he raised money to buy a boat to provide access to the world. There are currently three hundred people living there. Raphael House out of Joplin, Missouri, has established a church that averages 100 in attendance each Sunday.***Wednesday Tokla had gone to the island to make arrangements for our arrival today. He distributed 250 free clinic vouchers and determined how to lay out the team.***Today we joined a team organized by our Dr. Yinh. Six of his interns, including Tokla and Sery who help him daily here at the clinic on our campus,and one RN composed the team. Dr. Yinh has a practice in Phnom Penh as well as opening the clinic here about a month ago. He is a native of Viet Nam. He specializes in treating his patients in two ways. Trained in acupuncture, he is well aware of the 450 pressure points. Depending on the issue with which a patient is dealing, he injects B12 into one or multiple areas; often relieving the pain immediately! His other miracle cure is the inception of gold filament into the affected area.***Today we set up in three locations on the church grounds. Inside the church building three tables housed two pairs of interns and the RN who screened each patient. In the workroom at the back of the building, two interns set up the farmacy dispensing drugs prescribed in the screening process. In the outdoor arbor, Dr. Yinh and his son, Sokly, (a CBI student) set up for B12 shots. Two of our young students assisted in each area. Joe and I even learned to mix B12 and fill syringes for the doctor and Sokly! The screeners saw 287 patients. The doctor and son gave shots to approximately 130 people and injected gold into two people.****We toured the island when we first arrived since none of the team had arrived yet. We tasted fried bananas and visited with the children along the walking path. At the end of the path, Sokhom introduced us to three of the ladies who grew up on the island and make their living by making macramé bracelets and headbands. We purchased some from each of them pooling all the smaller bills we could find to pay them. Later at the clinic we would be bombarded by women and children trying to sell us more. We bought our share of their wares!****Between clinic sessions we were served a delicious meal of grilled fish, grilled chicken, fish/banana/vegetable stew, mango slaw and rice. For dessert we were given manioc root with a coconut sauce. It was all very tastey! A heavy rain interrupted my game of Noah's Ark concentration with the children. Very few patients came by after lunch, so we packed up about 3:00 and headed home where I found my English students awaiting me! Instead of a formal class this evening, we put together a butterfly kite and were granted entrance into the lot next door for kite flying and oral English practice.***The students who stayed behind today went back out into the community to serve. They accumulated several bags of trash and made new contacts inviting them to Sunday school and church tomorrow! They were all ready to relax with a big game of volleyball. I worked with a couple on Power Point skills tonight and downloaded some pictures onto their working computer for them to use.***It was a day of blessing in which God was honored.
Posted by Pam at 7:41 AM