We are perhaps the only Americans who have ever stayed in the hotel where we are in Bongaigaon.  This is the closest hotel to the village of Manikpur.  Dimbeswar selected it because they do not allow any alcoholic beverages on the premises.  The hotel receptionist has been quite taken back with our stay.  We have gotten good service, but it is not among our top five hotels of India tour.

This morning we left the hotel with Dimbeswar and the driver to go to a picnic with the children.  Halfway to Manikpur, Dimbeswar told us that the school was having a dance recital that we would attend before joining the children at the picnic site.  The school was all gathered in their auditorium for dances, recitations and skits...a talent show for the entire student body and their parents.  One of the little girls served as the MC and did a wonderful job.  As we entered the children stuck out their hands for a hand shake with "Good morning, Miss!"  They are all so eager to practice their conversational English with us.  The children were delightful.  Several recited Twinkle Twinkle while others performed skits they had written themselves.  The Indian dances were my favorite.

We left the school a little before 11:00 to join the children on the mountain side for fun and games while the adults were cooking for us.  We found them playing with their book bags and the items from inside them.   I passed out nametags to help us keep everyone straight.  Soon Dimbeswar rescued the bags from the picnic grounds, and Jonnie and I jumped into action!  First I pulled out frisbees which thrilled the group--first as they tried to ring them with their arms like a ring toss and later as crowns and the steering wheel of a bus!  Bullfrogs and Butterflies was introduced to this group with stickers on each hand.  They loved these stickers and even tore apart the trimmings to adorn their faces and necks!  I handed out bubble gum and showed them how to blow bubbles.  The contest that insued was worth a million laughs!  We all chewed our jaws tired!  And we wound up with a tie!  Hannah and Anne had the largest bubbles.

Lunch was prepared in a makeshift kitchen set up behind two Sarees stretched across poles.  The ladies in their finest attire were cooking over wood fires in large cast iron kettles.  We had rice, chicken, curried potatoes, vegetable salad, a puree and hard boiled eggs.  They set up a table and chairs for the Misses while the children were served on the ground.  Children sat criss cross with bare feet on a folded tarp and a wall from the kitchen converted into a flat bench.  Water for the cooking, drinking, cleaning and later bathing came from a nearby waterfall.  The ladies had cleverly set banana leaves up to serve as a spout!

After lunch Jonnie taught a little jingle about a heart and gave each child a heart-shaped lollipop.  They were delighted.  Time to visit, time to play, time to eat, time to relax out in the nature God has preparedfor us!  What a wonderful day of joy and love!  The children returned to the home in a large city bus, and we were escorted back to our hotel for the evening. 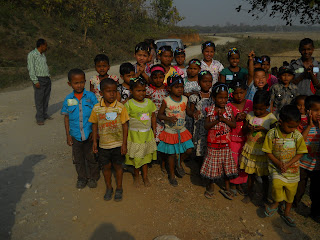 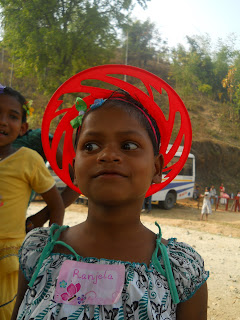 Jonnie and I tried to find an appropriate outfit from the vendors on the street, but our body build does not match the ready-made suits here.  We purchased a couple sarees, but have no idea how to make them wrap around to stay!  We will still be the American Misses or Aunties tomorrow for church and Bible study with the ladies.  Perhaps one of the ladies will be so kind as to help us out with a dressing lesson.
Posted by Pam at 6:42 AM