Awaking early, we had finished breakfast when Dimbeswar arrived with the car.  Bags were soon loaded into the vehicle and we started out across town for a "quick" visit and tea with Mamu and her girls at her parents' home.  Mamu is living here now to be closer to Maram's doctors and to be able to attend classes in Montessori teaching methods.  She hopes to be able to teach Maram using this style of learning.  So this was our opportunity for hugs and exchanges. 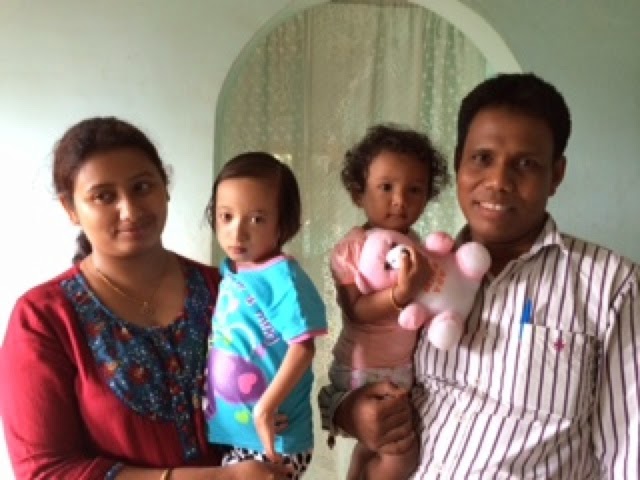 Her parents' home is a lovely three story house with carport for vehicles within the gated area.  She and the girls have a large room with western style bath.  They are surrounded by grandparents, aunts and cousins at all times.  Mamu had two outfits for me and demonstrated the techniques to dressing Assamese style! 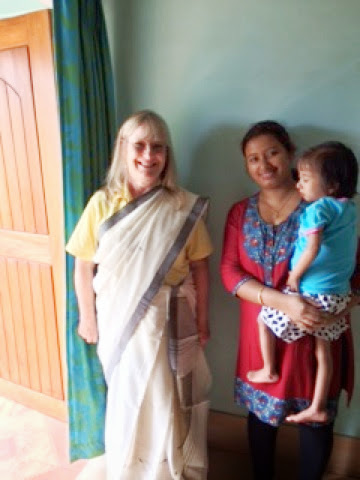 It took us an extra hour to maneuver back across town and over the bridge to the point Dimbeswar said we could begin timing the three hour journey.  Mark was blessed with the front seat to experience the thrill of traveling the Indian highways!  And a thrill he found it to be!  Dimbeswar's driver is adept at winding in and out weaving through transportation of all ilks...large tour buses with passengers perched atop, trucks hauling everything from gravel or sand to onions and potatoes (often with an extra passenger lounging on the bags and dangling his feet over the tailgate), tuktuks, bicycles, motorbikes, wooden carts pulled by a strap across a man's forehead, cars and jeeps.  He dodged families and little children on their way to school, goats and cows wandering freely and barrels set out as traffic control.  He slowed to almost a stop at each speed bump along the freeway and sped through the villages.  Once we reached the divided highway, Mark and I thought we had it made.  Two lanes traveling in each direction with a wide grassy expanse in between.  We sailed up to 120 KPH around the slower vehicles, but caution always prevailed!  The locals had no overpass or cross streets to use, so the left lane used for passing was also used for carts, trucks, bicycles and others needing to head in the other direction...from 120 to 0 in less than ten seconds!
We arrived at Little Flower School as the classes were dismissing.  The LFS bicycle buses were at the front gate awaiting their passengers.  The classes were winding down as we were escorted into the Burman home.  Mark and Ray will stay in the two rooms in Dimbeswar's home.  My luggage was delivered to the guest room while we three ate lunch at Dimbeswar's table.  After lunch we toured the campus before the rain returned.
It was so good to see that the second floor of the Gary Tate Building has been finished out enough to be used for housing of several of the Ruth Gunter children. Eight of the girls, ages 9-12, make a pallet in the area once designated to be the guesthouse kitchen.  Their belongings are kept in the outer room next to their sleeping quarters. The large dorm room sleeps some of the teachers and a few of the older boys.  Twelve of the twenty six boys are housed here on the Little Flower campus sleeping on the floor of the office, the dining area and this new dorm room.  The second floor toilet project did not work out as planned, so those areas are used more for storage.  The front office has become Ragav Ray's office for WBS Assamese.  The smaller of the two bedrooms in the guest suite has become the home of Nelini and Jagantha and little Gabriel.
The plans for the third floor have been canceled and work on the first floor has come to a halt for now. The floor has been filled in with sand to be used as a general assembly room.
We visited in Raghav's office for a while as the songs of the children echoed across the grounds and then took some time to reorganize our bags.  The children gathered in the space outside my bedroom to visit.  As I distributed their gift bags, they spread the word to others.  Soon the boys were rolling cars and the girls bending rabbits -all comparing pencils and hopping frogs!  Giggles and grins abound as they attempt to understand the Texas drawl and respond with their English learned from teachers with Indian/British language training. 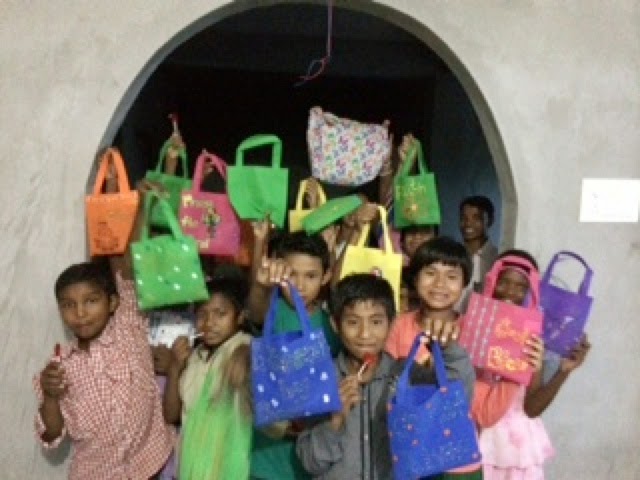 Meals are served for us in Mark's temporary quarters.  After dinner, we attended devotions with the children in the K2 classroom.
Today the rains have soaked the earth for hours on end.  Our goal to visit before the monsoon season was not realized.  It seems we either have electricity or rain, but few are the hours with both!
Good night, John Boy.  Good night, Manikpur!
Posted by Pam at 1:37 AM